A little art in my garden

The fence outside our living room has been bothering me lately.  I have been toying with making it a green wall, and then I had the brainwave of moving the mural that my younger daughter made for me many years ago.  I think I have found the perfect spot for it!  It is semi protected by the tree above. 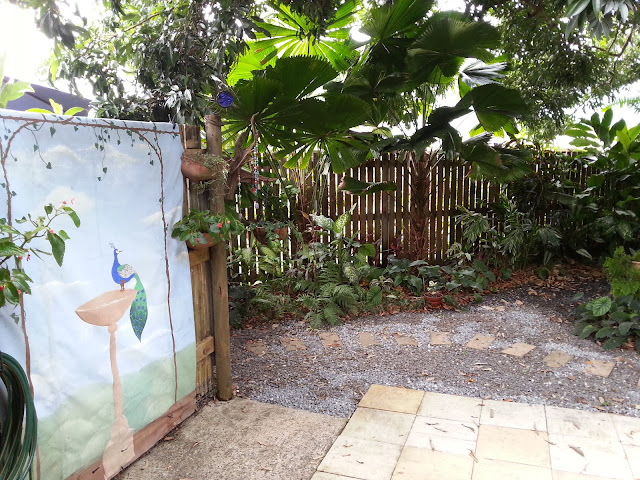 It is so nice to look out on something pretty.  We are still on the lookout for another gazebo - just watching the sales and clearance racks as they seem to have jumped up in price.  I attached some plants on the sides.  My dear hubby spent hours during the week pressure washing all the pavers, since they get mouldy and slippery. 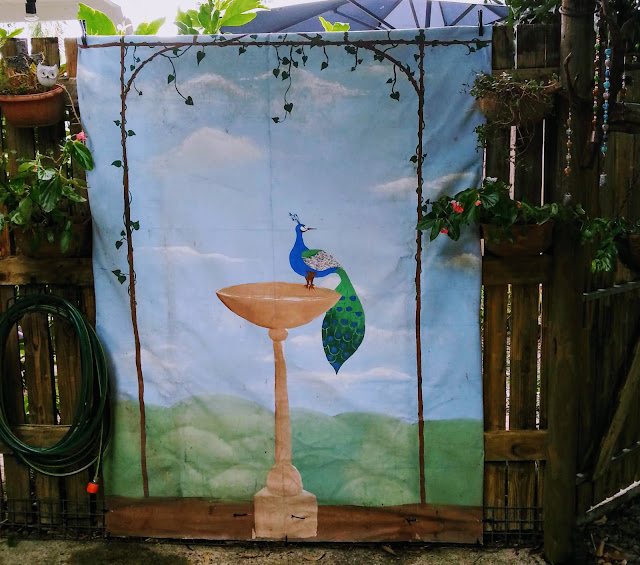 While I was cutting back the mandevilla on the back fence - Gosh that grows like crazy! - I discovered a hanging basket of orchids had tipped over because the plant was so heavy and the branches were reaching out and hooking into other plants.  I could not straighten it in the basket, so decided I would try it on a stand in one of those plastic baskets.  Filled with gravel and a bit of soil weighs the pot down nicely. It would be nice if it flowers!  We will see if it stays there - it still looks a bit messy. 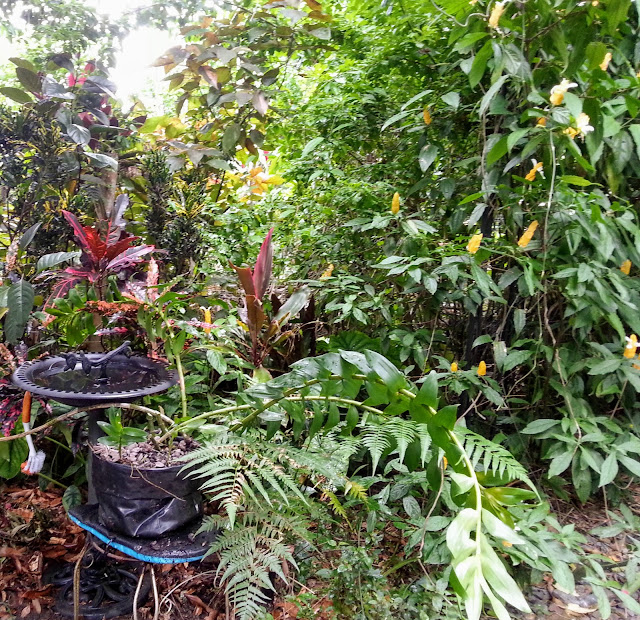 I had to put up the big umbrella for shade while I worked on the other area that has needed work for some time.  Hibiscus does not do well in my garden because I have erinose mite which I just cannot get rid of.   I removed two dying hibiscus bushes, the bleeding heart vine which is far too invasive for my liking, and the passionfruit vine which has been in that area for a couple of years and is no longer at its peak.   Luckily our neighbour's passionfruit vine is now climbing over our back fence, so we still have passionfruit. :)   It really is still too hot to be out working in the garden, but I kept up with lots of water, and then thoroughly enjoyed a swim afterwards!
I have ordered some cosmos and zinnia seeds, and hopefully soon that area will look like a cottage garden!  Wow! that was a busy weekend.!

Posted by africanaussie at 11:02 AM

Email ThisBlogThis!Share to TwitterShare to FacebookShare to Pinterest
Labels: February