When I came back from overseas, one of my friends gave me an old sourdough starter.  Old is good when it comes to sourdough, and this one had been handed around for at least 10 years.  I had heard and read about sourdough over the years, but when I started to make the first loaf I did feel a little out of my depth.  As I started to knead it I added more flour until the dough began to feel more like a regular dough.  I baked that loaf in my cast iron pan with the lid.  The taste was good and sour, it had a nice crust, but it was heavy. 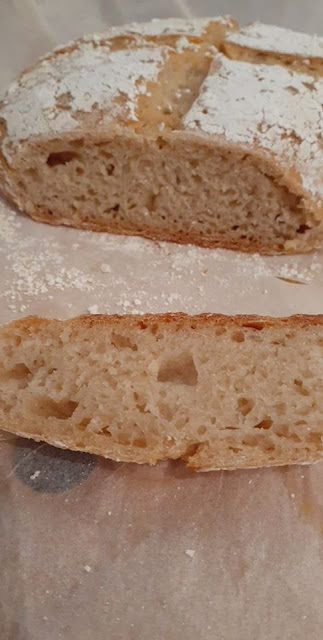 Last week I got a book out of the library called "sourdough" by Yoke Mardewi, and now this is a baker who knows her dough!  It is an amazing book that goes into great detail on every step of the way, and each recipe is so detailed, leaving nothing to chance.  I often make pita bread and have it ready in the freezer for a fast meal, so that was the first recipe I chose.  Then I decided to make hot cross buns  mainly because I really don't like the idea of throwing away excess starter.  I used half of the hot cross bun recipe to make a loaf of fruit bread. - that was cooked in a separate loaf pan, and by the time I took this photo I had shared the rest of the buns with my neighbours. 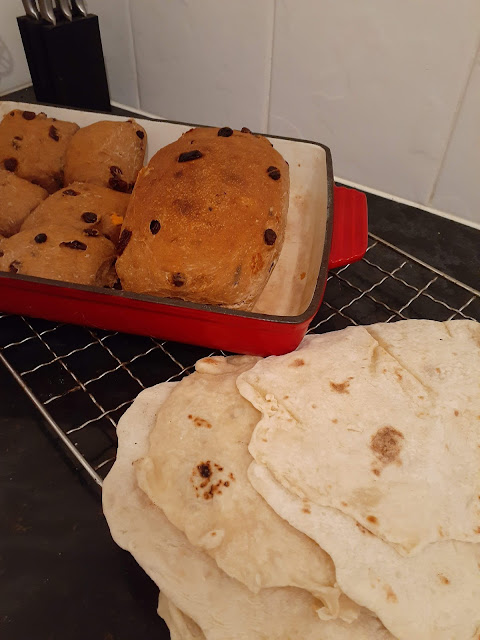 It was a whole day, starting with the night before to feed my starter!  I flipped back and forth from the kitchen to my other chores,  continually checking the clock and my recipes.  I was really very impressed with both recipes, and have  a few more earmarked for next weeks baking day. I see that Yoke has a website wildsourdough So I will be keeping that in my feed for more ideas and help.

Have you tried sourdough?
Posted by africanaussie at 2:44 PM