I feel a bit of a fraud calling what I did a design.  More of an evolution.
A note about my old photos: I was having trouble with my smart phone and stopped syncing photos, then thought I would delete them off my phone so free up room.  Take my advice - don't do that - it removes them from Picasa permanently.  So you will just have to use your imagination about what the garden first looked like. :(
Basically there was just lawn and I covered sections with cardboard, and lots and lots of mulch.  (I got an eight ton load from the tip)  Slowly as that broke down I planted, ornamentals on the side and a veggie garden out the back.   The veggie garden is a triangular shape.
One of the first things I read about was a herb spiral and I got a few big rocks and built up a small spiral, filling in the centre with crusher dust which is very well draining. I managed to retrieve an old photo of the herb spiral. 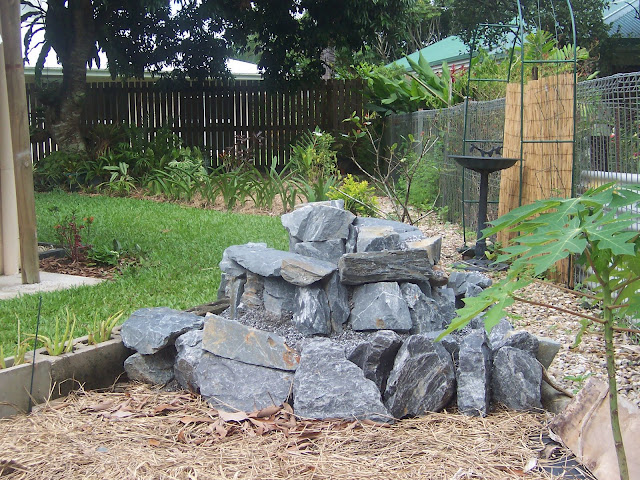 My main purpose was to be able to grow rosemary, something that struggles here in the humid tropics.  This is in the smaller part of the triangle, the first part of the veggie garden that you reach turning the corner into the backyard.  Over the years the bed flattened out and expanded, but the rosemary bush in the center is still doing well.  It is lovely and sunny so naturally when friends gave me flowers they were planted here, so it now has a flower border, but still plenty of herbs. I realised early along that I need to create separate beds to that I could rotate crops.  The next bed is the perennial bed, which started out as asparagus, but the purple asparagus is the only plant really doing much.  This last winter (our main growing season) I encroached on the the asparagus and planted out a couple of tomatoes, tatsoi, and now there is a volunteer pumpkin, but I don't know how long that is going to stay as there really is not enough room for a pumpkin vine.  Behind that is a pepper vine, vanilla and coffee. The standing compost has also moved there recently, and there is a choko on the fence behind that.  In front are three wicking beds with mint and kang kong. 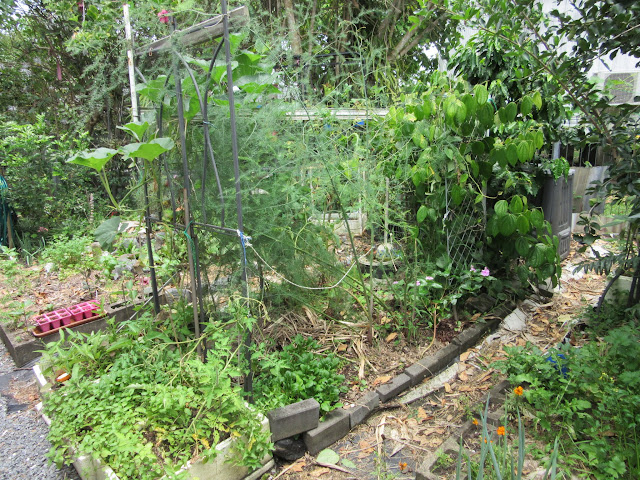 The next one along has two wicking beds with eggplant that have been doing very well for a couple of years now.  They never last that long in our soil which has bacterial wilt.  The front section has Amsterdam celery which looks as though it is a perennial, spring onions and then under the shade of the Barbados cherry is my rocket.  Rocket was amazing this year.  In front is a pot with basil. 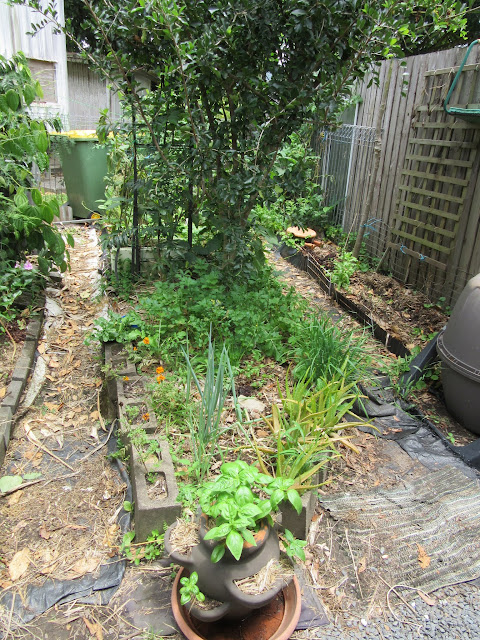 Since you cant see past the Barbados cherry I took a photo from the back of that bed although it still looks very overgrown and messy.  This is where I had tropic tomatoes and tasoi and assorted lettuces.  also cucumber, although that was not amazing this year.  Now sweet potatoes are taking over which is fine as that will grow well during the wet season.  The long green bean is running rampant and I will try to keep it under control.  I pulled out one tomato bush that seemed to be coming to an end and made green tomato chutney, one bush still seems to be doing well. 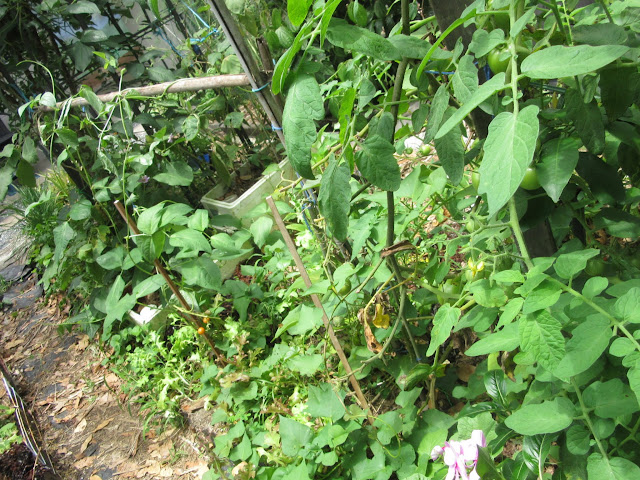 The bed against the fence had snow peas, and purple king beans, but it was too hot for them.  I use a lot of ginger, so this front half is now planted out with ginger for the wet season. I started making water kefir, so I can see I will be using even more ginger. There are cherry tomatoes behind that, and then lemongrass. This bed has three paw paws and sometimes things don't like to grow near paw paw trees.  I was keeping them until they flowered and will pull them out if they are males as I only need one male tree. 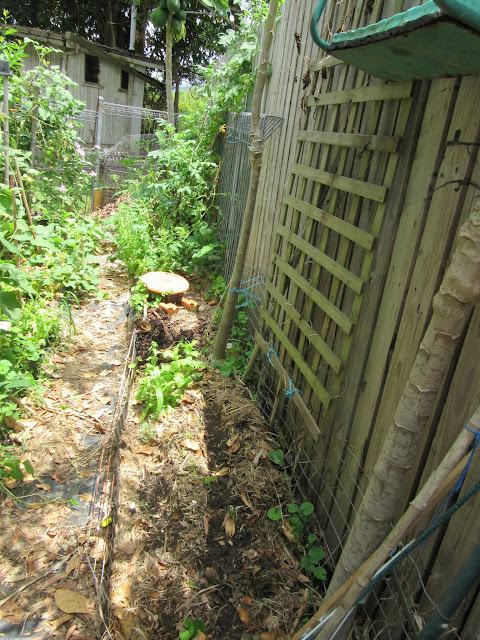 Slowly the garden filled in and evolved, until I don't have one blade of grass in the backyard, and only a small strip out front.  I had some dwarf fruit trees in pots that were not getting enough sun in the back and they were moved a couple of years ago into what is now fruit salad alley. 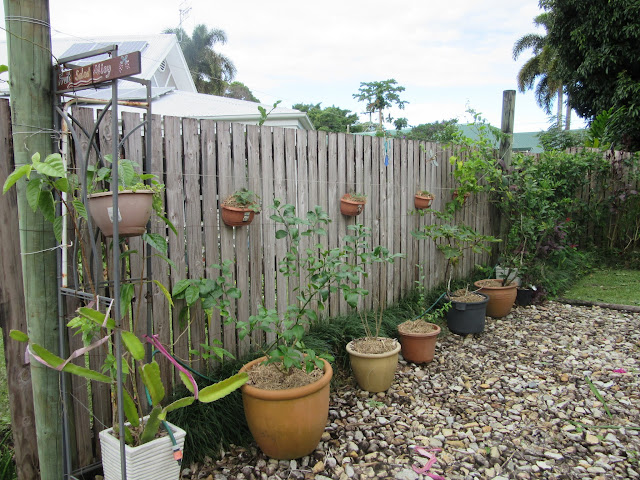 Looking forward to seeing what design features all my other gardening friends on the Garden share collective have shared.  I will probably get some new ideas and be able to add them to my evolution.
Posted by africanaussie at 10:08 AM