Time to share our gardens again! - here is the link .  Our wrap up will now be at the end of the month, although I will be a little late for the end of August as I will have family from overseas visiting..
July has been a good month in my little tropical garden.  I have been working really hard to make sure that we have something to harvest.
Cucumbers: We had tons of rain which some of the garden liked, but the cucumbers which had been doing well got downy mildew, so they had to be ripped out before it spread to the other new cucumbers I had planted.  I am not sure if they will have fruit by the time August 18th rolls around.

Tomatoes: The two tropic tomato bushes that a friend gifted me have been overloaded with fruit and the cherry tomatoes are also doing well, so I think this month will be all about the tomatoes. 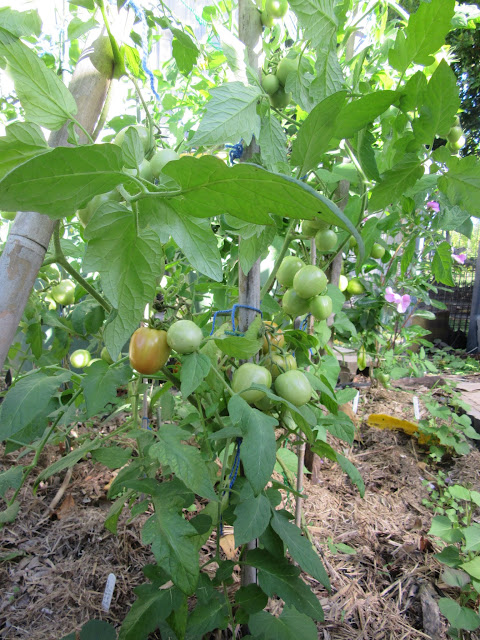 Eggplant:  The eggplant went through a bit of a slow phase, but then when I cut back the barbados cherry and they got more light they took off.  here are the round Thai ones and I accidently left one to get quite big and it was lovely and tender. 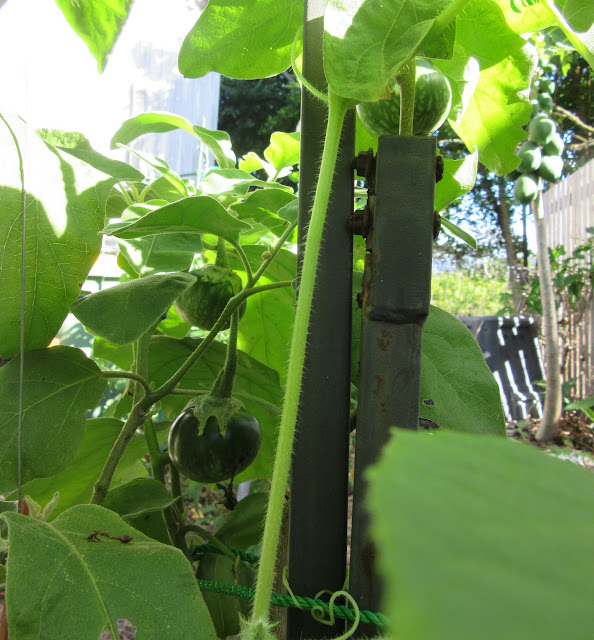 I also have the long purple ones. 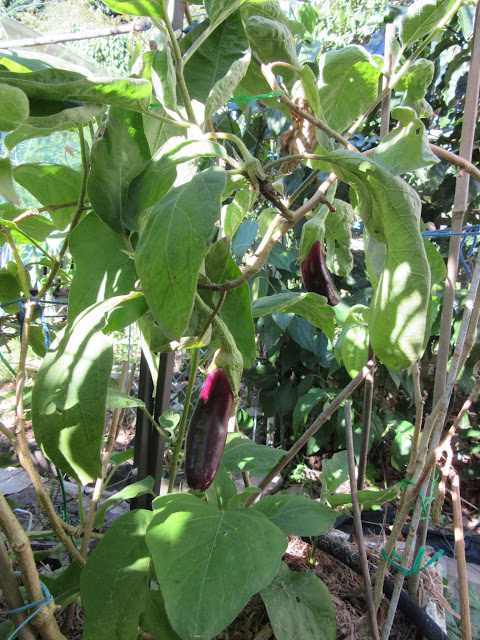 I bought a punnet of silverbeet on the clearance rack and they are looking quite nice and healthy - unlike the ones I grew from seed.   This plant in the front is watercress 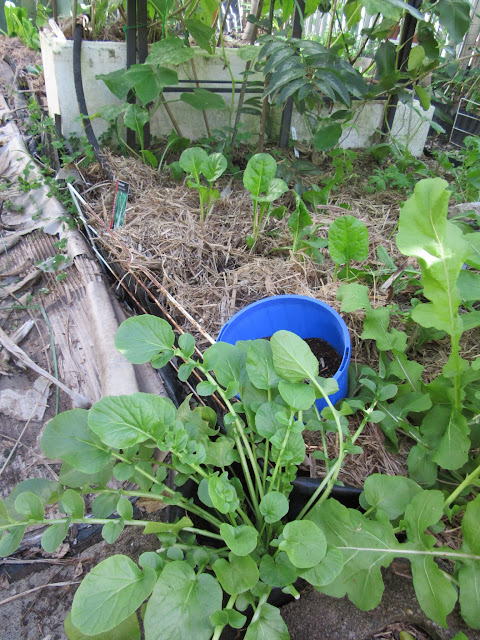 I also have lots of peppery rocket, and also a new to me plant - amsterdam celery - which is a great addition to salads. 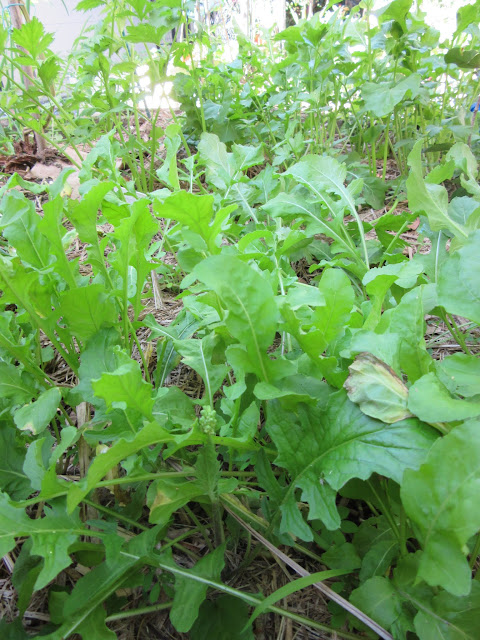 Choko:  The choko vine is growing, but no sign yet of any fruit. 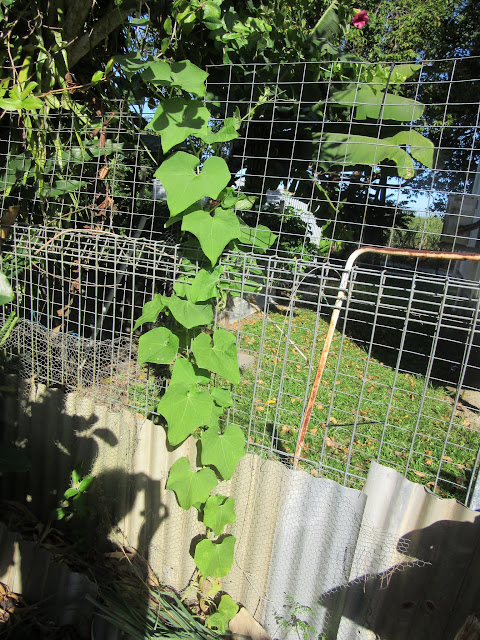 Blue lake beans:  The vines look healthy and I have seen a few flowers but no beans yet. 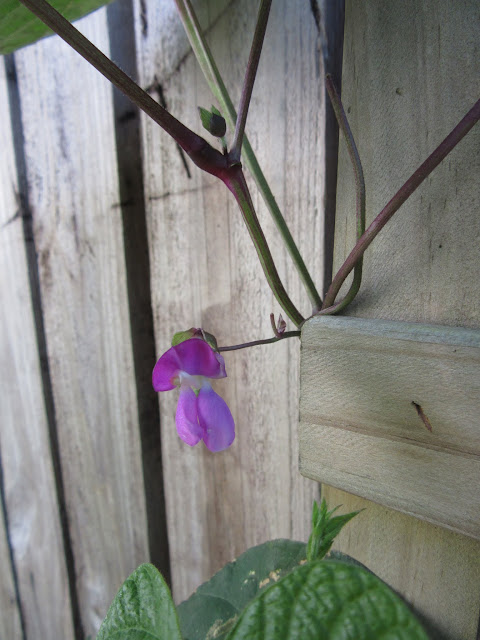 Snow peas:  Snow peas are travelling up their trellises, but sure taking their time to fruit as well.  Once again maybe I am just being impatient.  In front of them is darwin lettuce which seems to like this climate.  It is similar to a romaine, although the leaves are soft and floppy.
Lettuces and greens: Something started chomping on my red leaf lettuces, so I got out my chili garlic spray and shood them away.    Tatsoi and bok choy have been planted but not growing that fast.  I suppose since I start from seed it seems to take forever, but I just love the whole process. 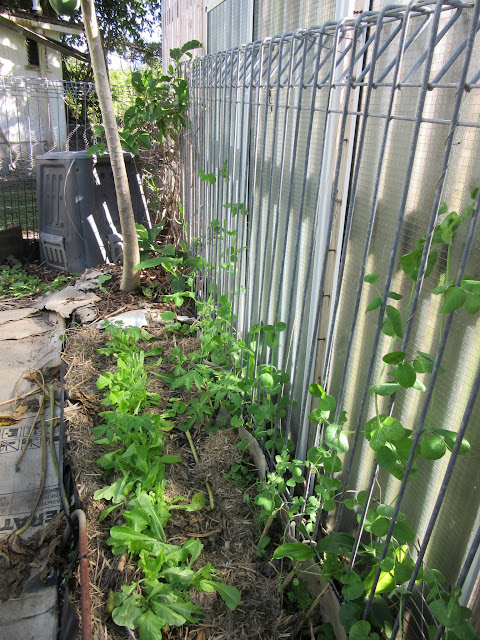 Sweet potato:  Volunteers are popping up all over the place, and that is fine I reckon they are growing under the lettuces so maybe they can have a symbiotic relationship!  I seem to have another round of coffee beans starting up.  I didnt do anything with the last ones, but the birds sure enjoyed them! 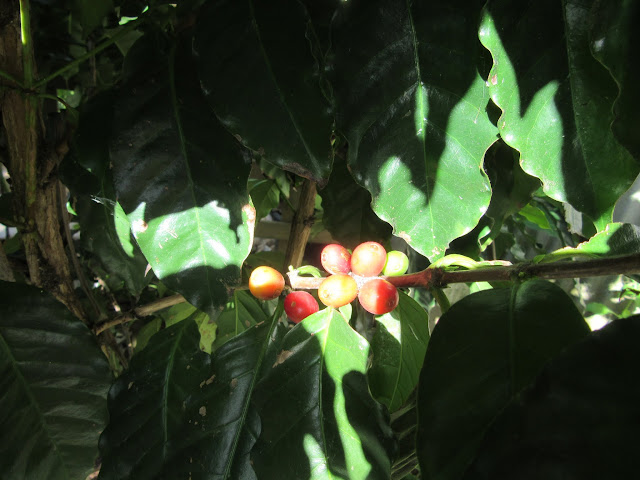 Pawpaw: I picked the first of our red papaya, and there are lots more on the tree - yum.  It is not as red fleshed as some that I have seen.

To do:  I have been spreading out a bit of chook manure and blood and bone and watering in well and then have also mixed up a foliar spray of charlie carp and sulphate of potash and will continue to keep that and the mulch up to date.  Regular watering is sometimes hard as I have been leaving for work in the dark and coming home in the dark. If it doesnt rain I get the hubby to turn on the soaker hoses once or twice a week.

Posted by africanaussie at 3:26 PM