A couple of years ago when I still had quite a few bare spots in my back yard I accepted a couple of passalong plants from a neighbour.  I had seen them in his yard, and they were magnificent.  The leaves were lovely and silver-backed and HUGE, and made a lovely sound brushing against each other in the wind.   I was quite taken with them, and planted two out in the corner of my garden next to the heleconias.  That side and corner really started to fill in. 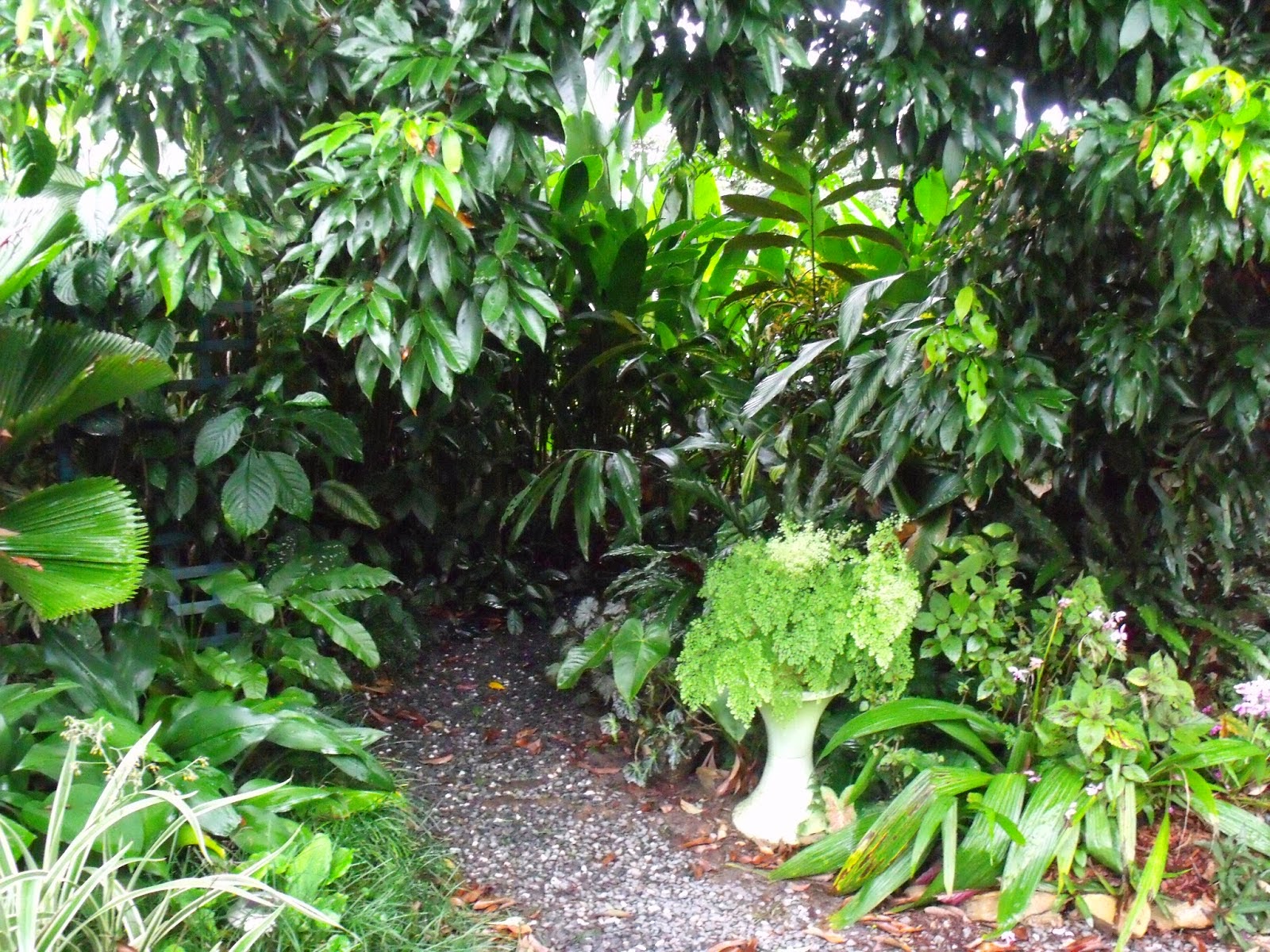 Did I mention they were HUGE?  What was I thinking?   I have been slowly cutting some of them back and noticed that they were spreading rather rapidly.  Suddenly I wasn't so in love anymore.....
I started working on one clump about a month ago, and it ended badly.... with me sitting in tears sobbing about how I was just not a gardener, nothing grew right in my garden, how stupid could I have been to plant these....everything was just a mess.....
I had cut the 12ft leaves down, and dragged them out to the kerb.  Then I began to try to dig out the root system, it was muddy, which I thought would make it easier to dig, but my gosh I think those roots must have gone down 12ft to compensate for the height!   I realized after breaking a garden fork that my tools and I were not strong enough to remove those stupid plants.  Consequently they were sprayed with weed killer.  I will keep an eye on them and any little green shoots will get zapped.
This weekend I tackled the remaining clump, and this time broke the handle of a garden spade!  Those free plants have turned out to be quite costly.  I need to be realistic about the size of my garden and next time I am offered free plants I will think very hard, and I might say thank you, but no!
I like the look of the pathway now - less like a jungle and more like walking through a small tropical garden. 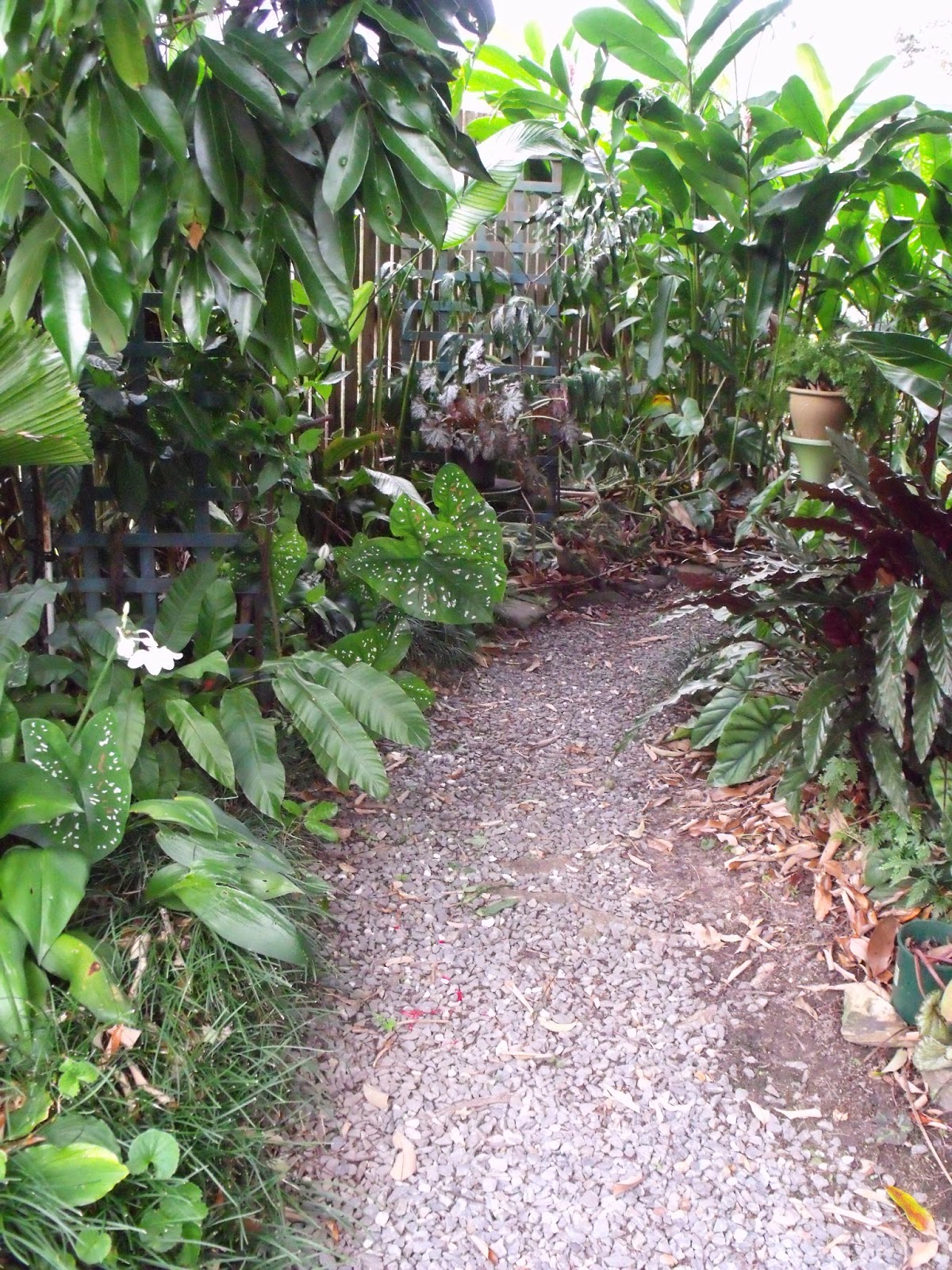 I leave most of the vegetation I chop down - chop and drop method I call it.  It looks messy for a while, but mixed in with the fallen leaves it eventually creates lovely soil, just like it does in the forest.  On the front blue trellis is a justica - my other one in more light has been flowering for a while now, so I am sure the one on the pathway will also enjoy more light. 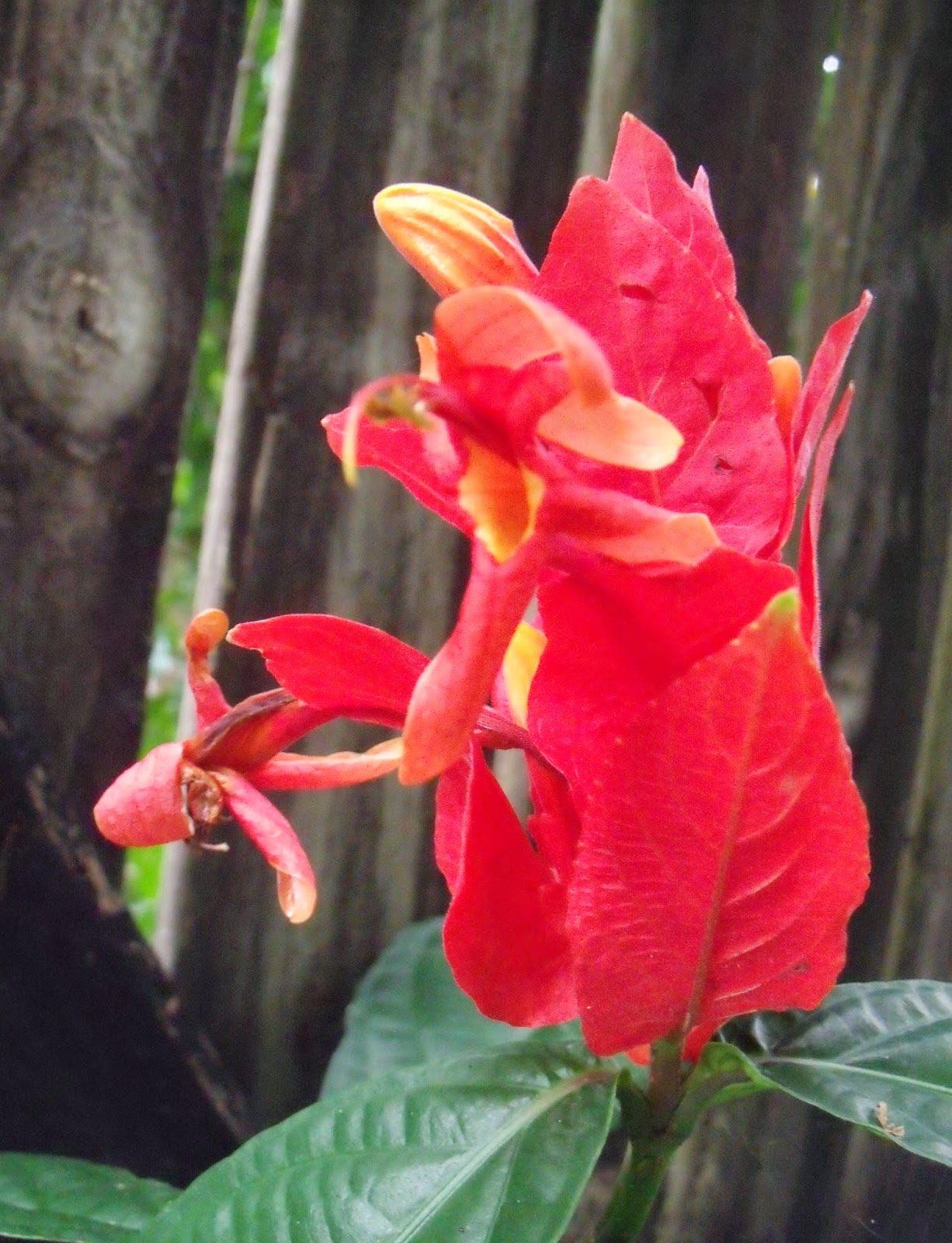 The light is getting all the way down to the Eucharist Lily just opening up.   It looks almost as if the light was shining out from within it. 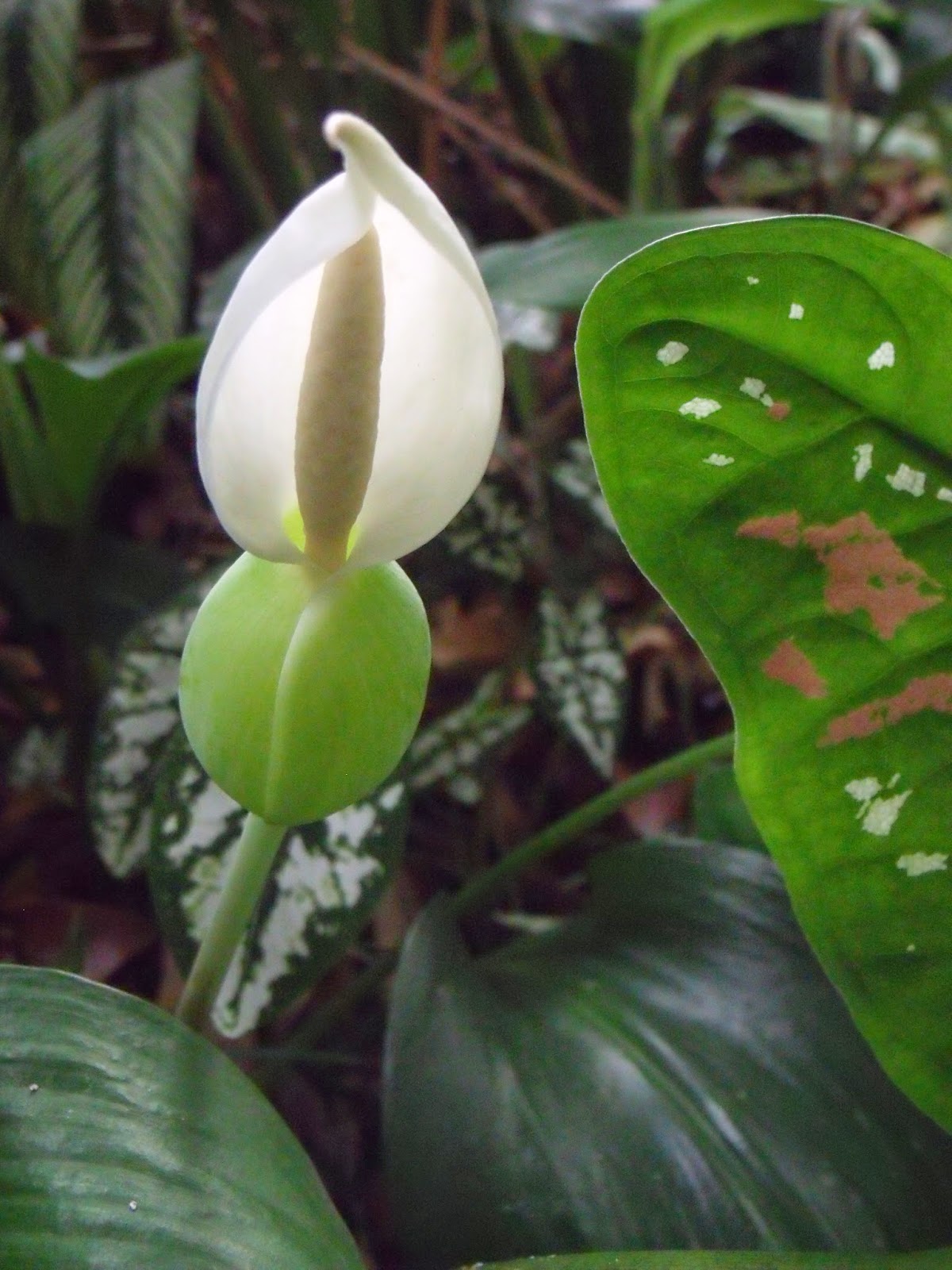 I moved the bridal veil bush there too - it was so hidden away nobody could see the gorgeous sprays of white flowers.  I hope it likes its new home. 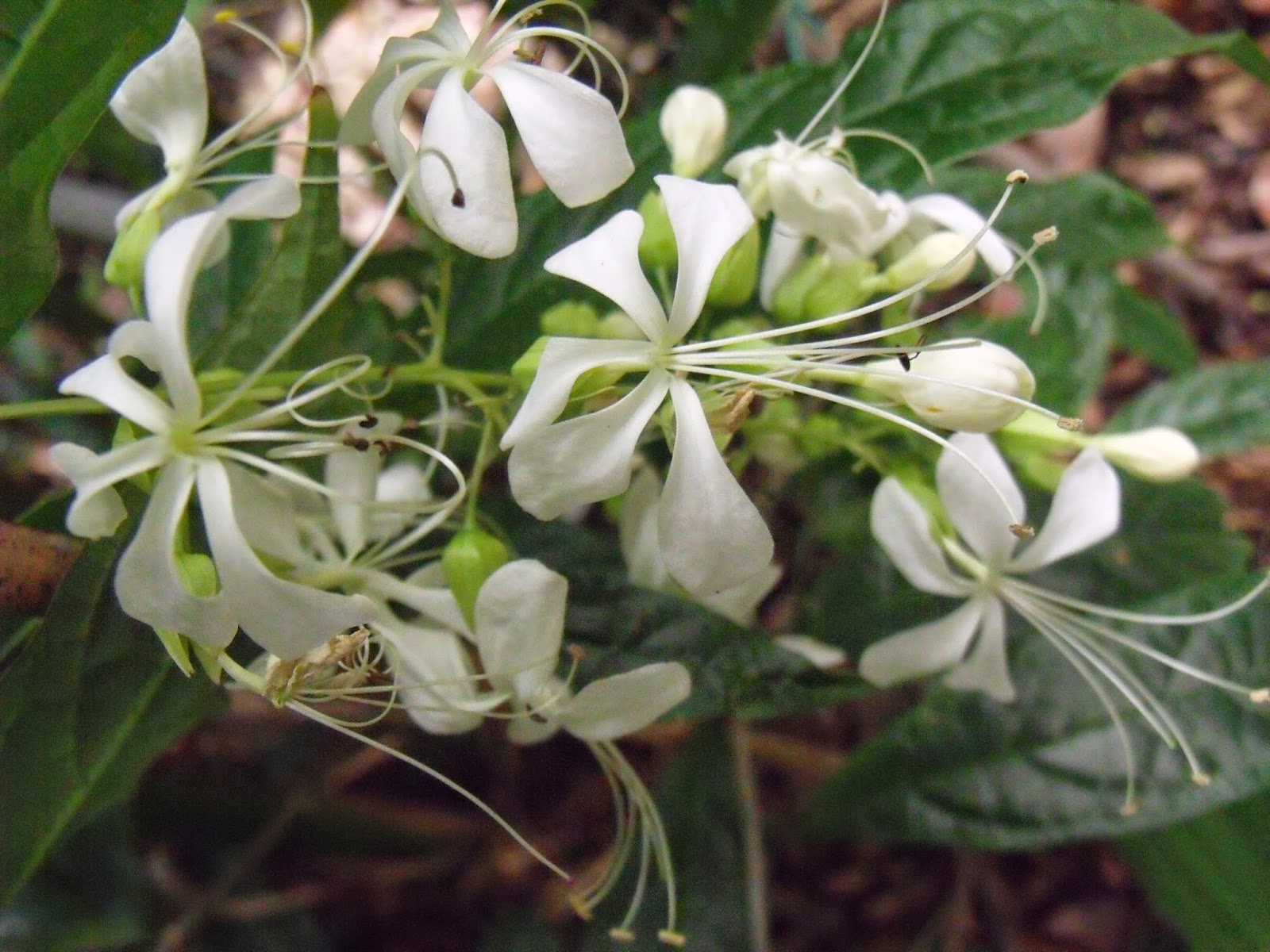 Along with the cordelines there is now lots of colour  and light in the garden path once again. 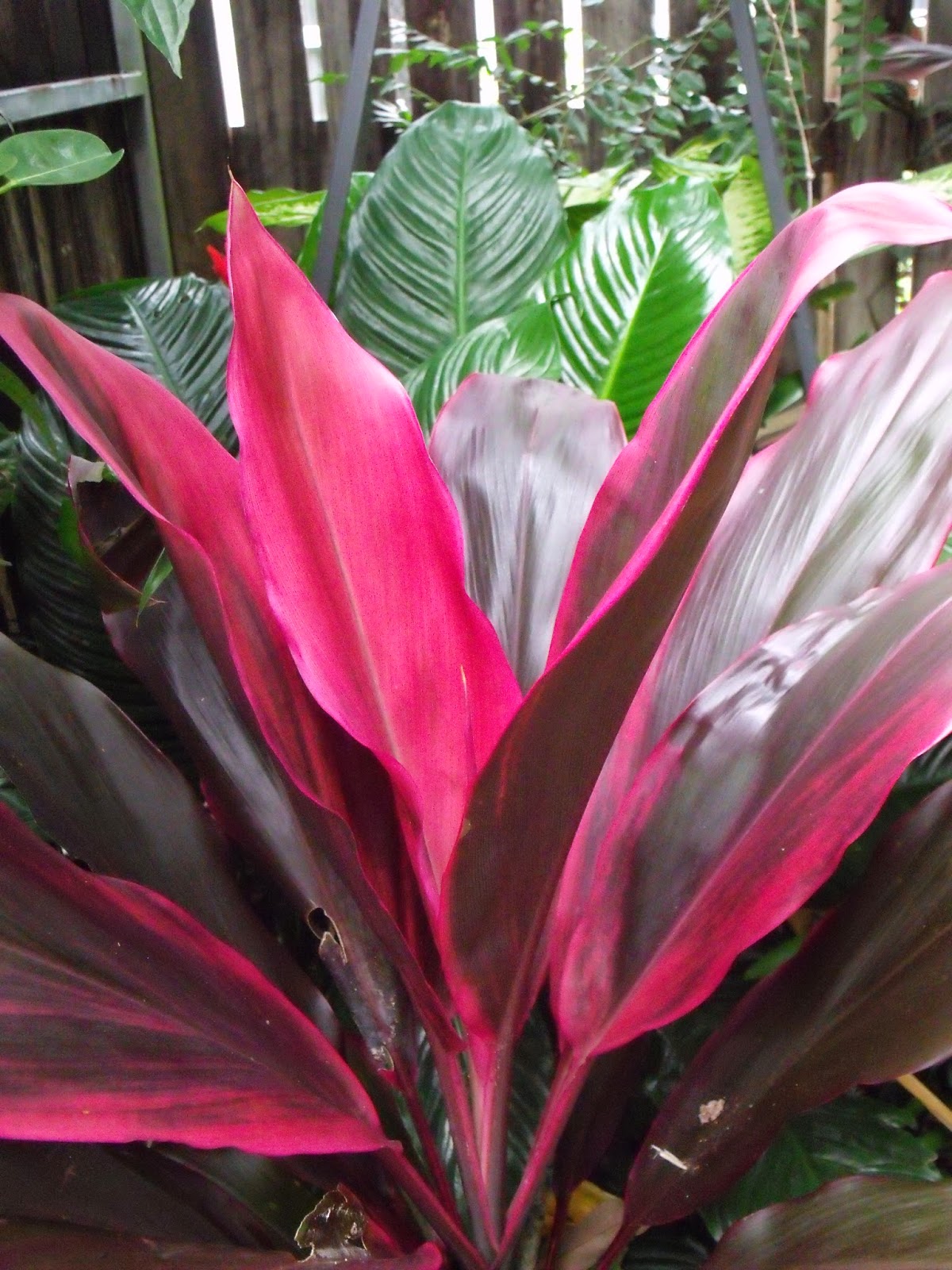 Friends popped in for tea and scones and we all enjoyed sitting out in the garden,  my LITTLE garden, I must keep reminding myself every time someone wants to pass along a too big plant.
Posted by africanaussie at 12:02 PM

Email ThisBlogThis!Share to TwitterShare to FacebookShare to Pinterest
Labels: May, pathway, side garden, tropical garden