Did you know it is/was compost awareness week?

Compost is something I do for my garden that I feel really really good about.  In the back of my mind I knew that somehow compost sequestered carbon, but the facts here on Jerry Colby Williams blog make me want to go out straight away and build another compost bin.

My first compost bin was just that - a plastic bin, and it is still going strong - it is about 8 years old now.

and I worked the compost in that continuously, turning over the compost two or three times a week.  I dont have the room for hot composting, but my gosh I got my mixture humming along pretty nicely.  Some of my bins favourite food is
Browns:
mulched dried leaves from our lychee tree
shredded cardboard and newspaper
Greens:
cut lemongrass leaves
seaweed picked up from the beach
beer waste from the bottom of the beer brewing barrel 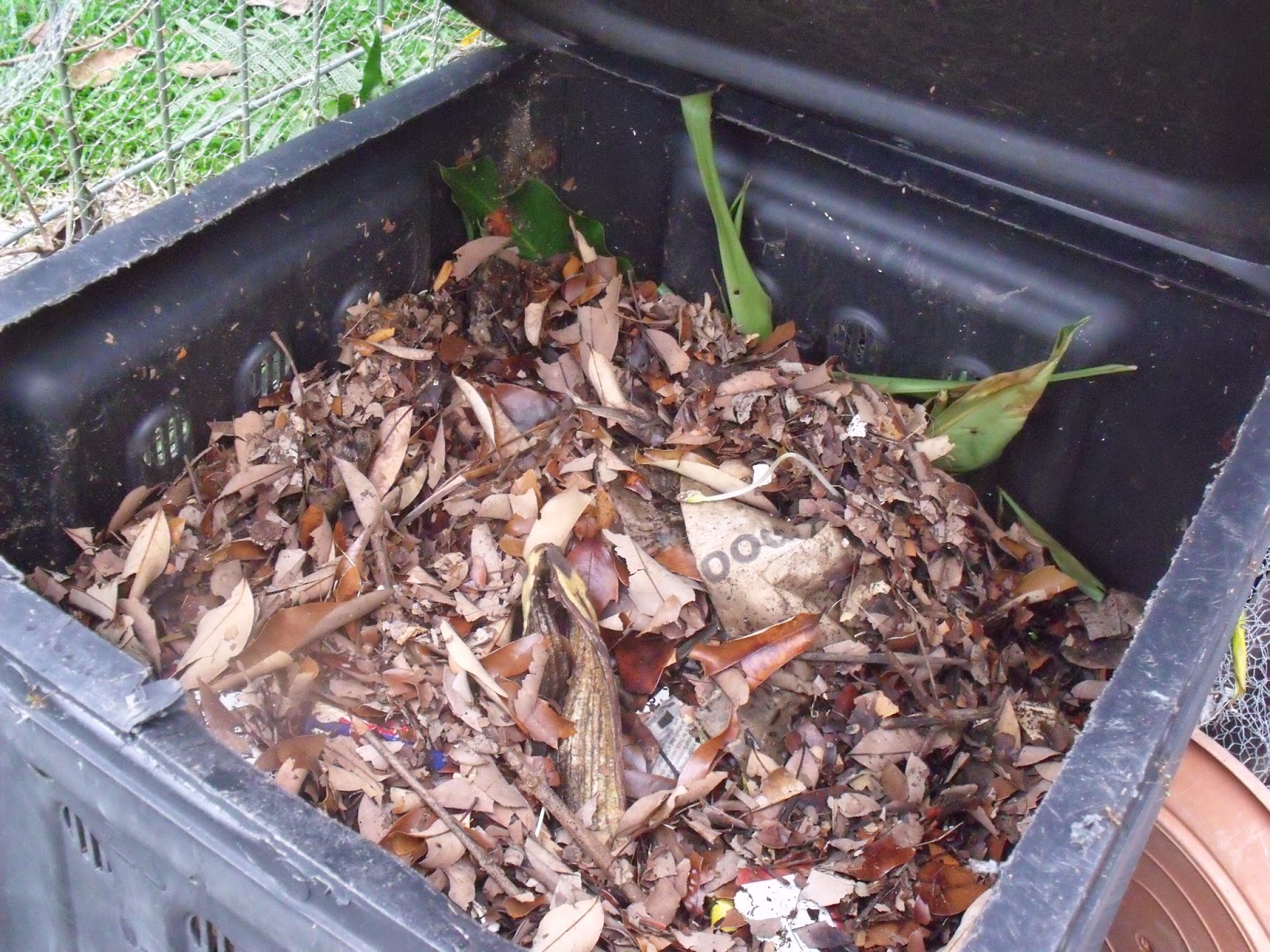 Then I was gifted some gardening money and off I went to pick up a compost tumbler.....  I find this one actually takes a bit more work, and here I thought it would be less work!  This is where kitchen waste goes and it often can get a bit too wet.  When that happens I gather some carboard or shredded paper to soak up the extra moisture.  The tumbling bin can easily get heavy, and that is when I remove some of it and turn that into my old compost bin in the corner.  That is where compost goes to mature.  If I have extra leaves or clippings I add them to that bin as well.  I dig the compost out of the bottom gate of that bin, actually digging a hole right into the dirt under the bin, since once I start mixing, the compost falls into that hole and the earthworms can start doing their thing. 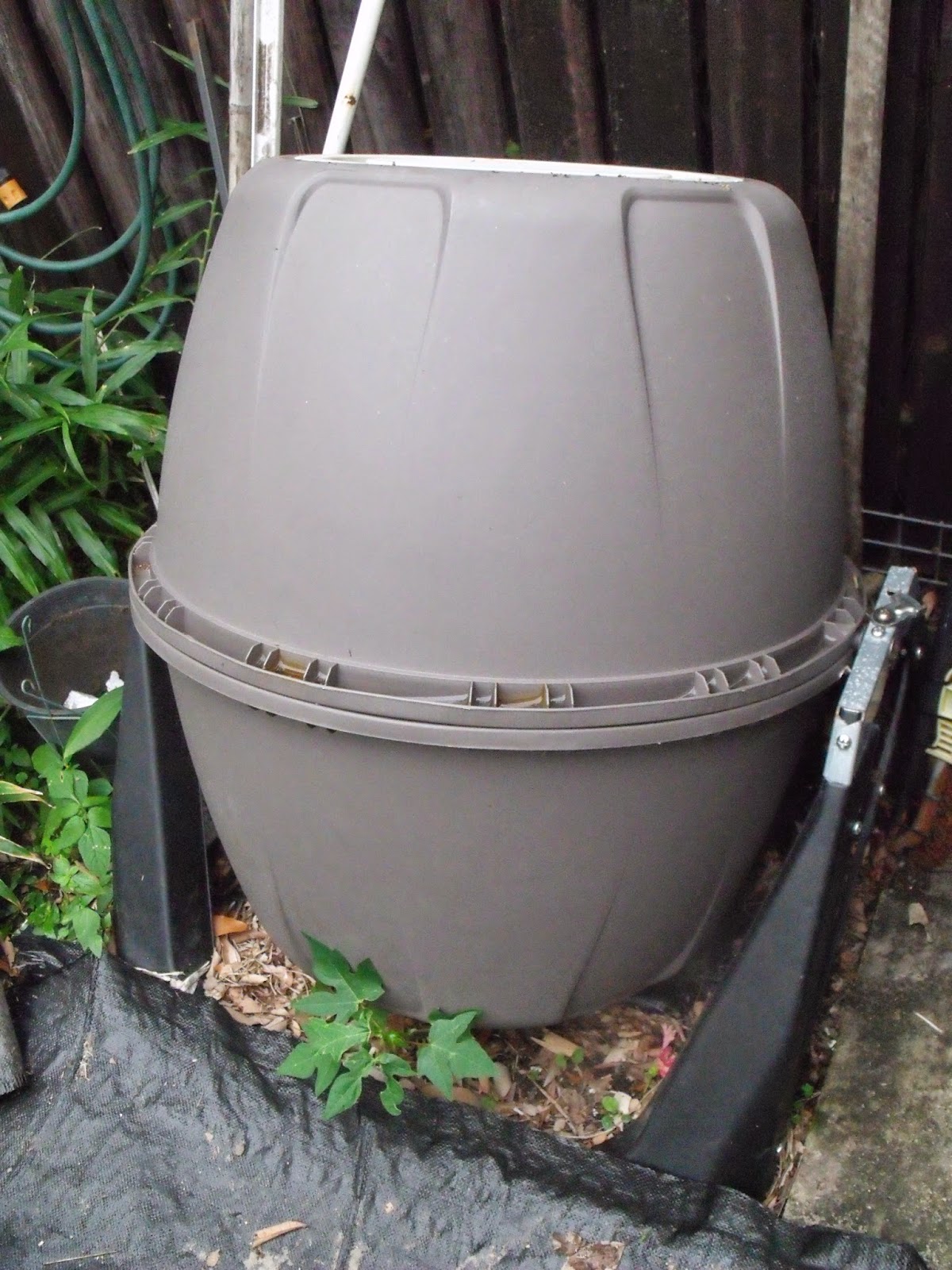 This weekened when I was transferring compost from the tumbler into the bin  I noticed something I have never seen before.  Red wrigglers....they must have come from my in ground worm farms.  This I think is a regular earthworm - surely I would be more likely to have these in the standing bin which actually rests on the ground.  I think the difference might be that this is wetter - note to self - add some moisture to the standing bin. 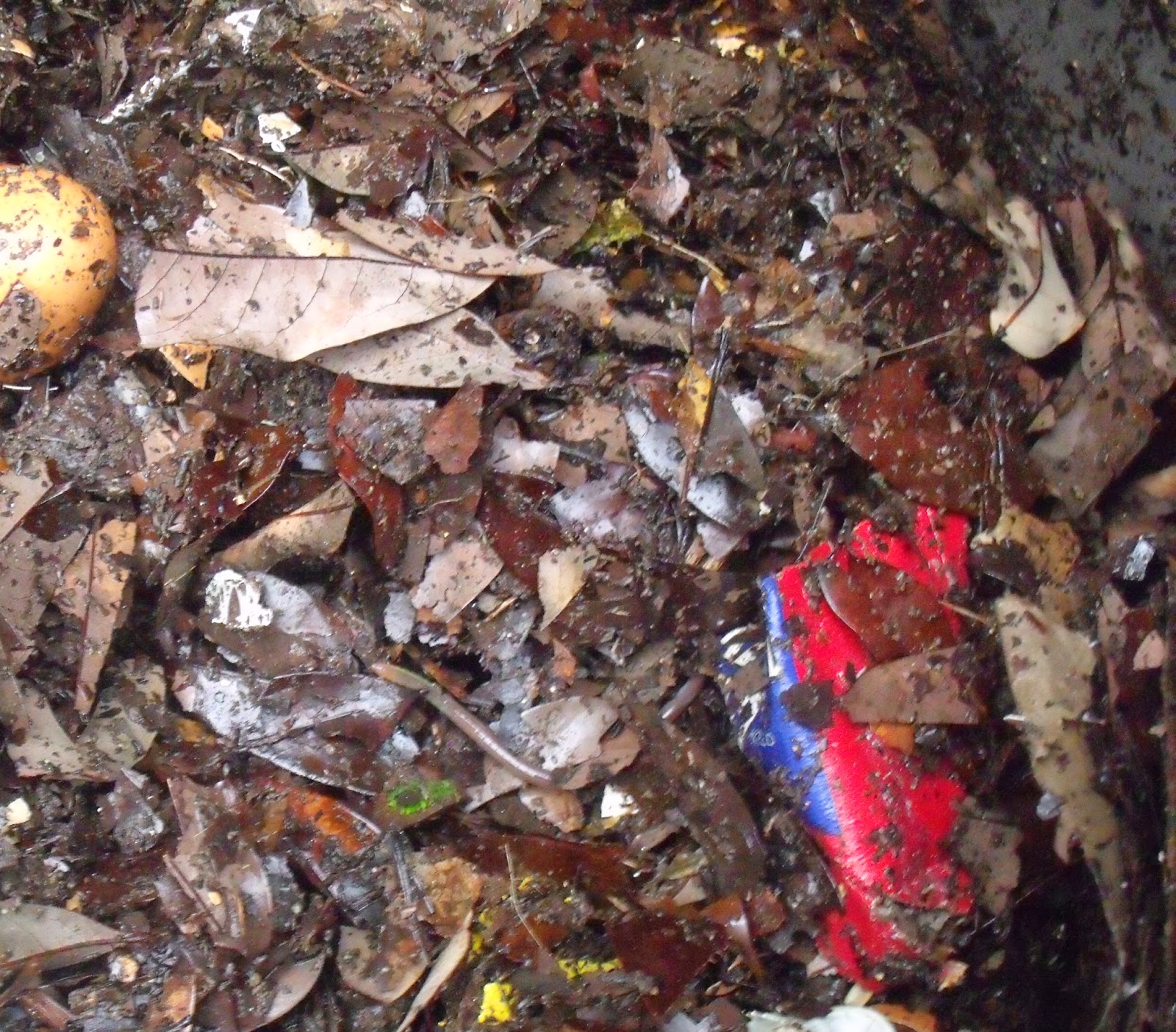 Wow!  I love the idea of all these little creatures and micro-organisms travelling around my yard.  I must say I was hesitant to add worms, having such a small garden and hearing stories about other gardeners in this area and the trouble they had with regular worm farms.  It gets very wet and humid in the summer and that is when worm farms can get slimy, smelly and infected with flies.  I did a lot of reading about in ground worm tubes and eventually added some to my garden.  What a great idea....they are insulated from the weather, and survived the flooding rains we had during the cyclone. 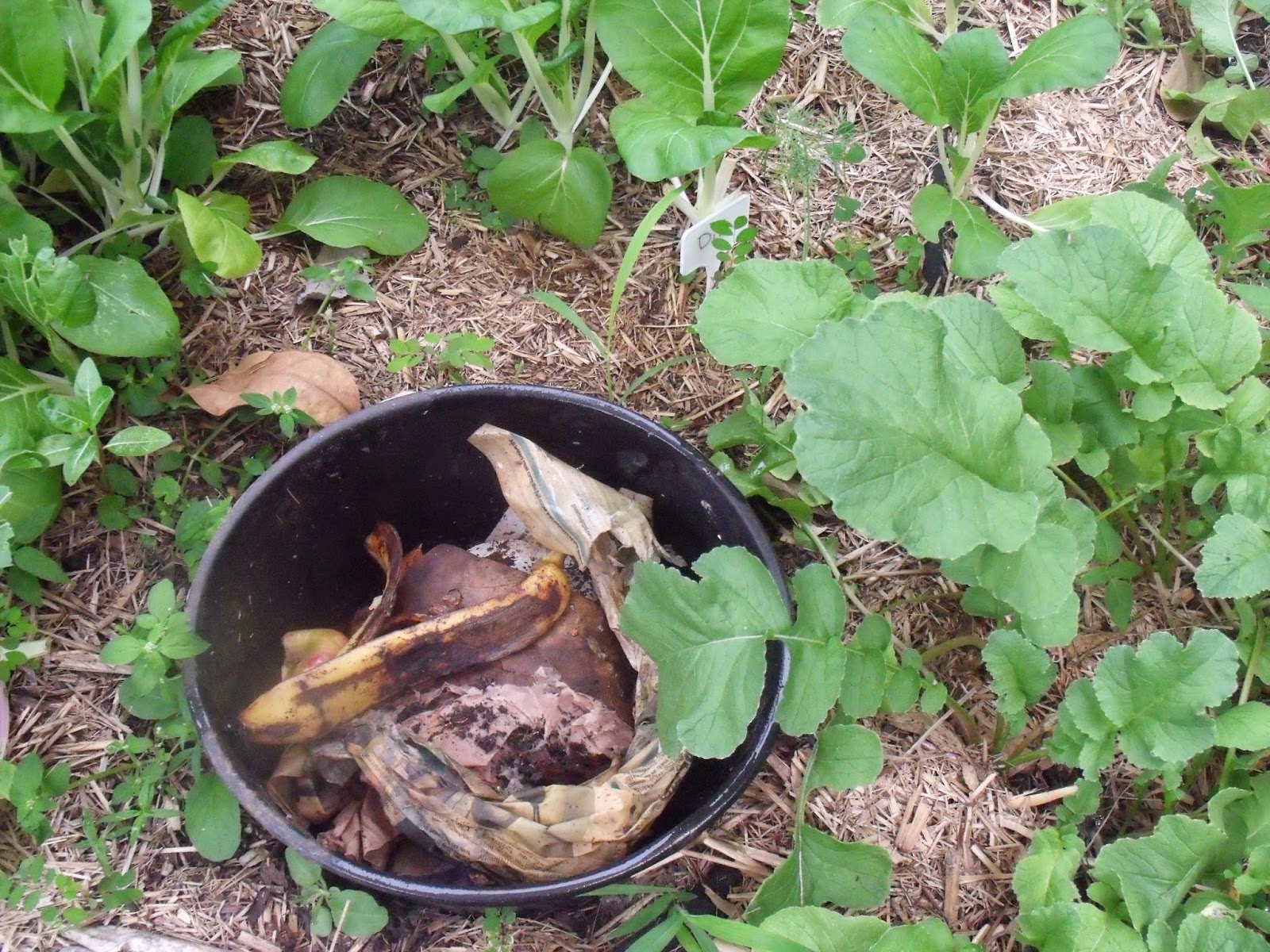 I dont harvest the worm wee - I guess that just goes straight into the soil, but I alternate a top bucket between my two worm buckets, and as they move up I can then harvest all the lovely worm castings left behind in the lower bucket. Here you can see one bucket on top of the other. 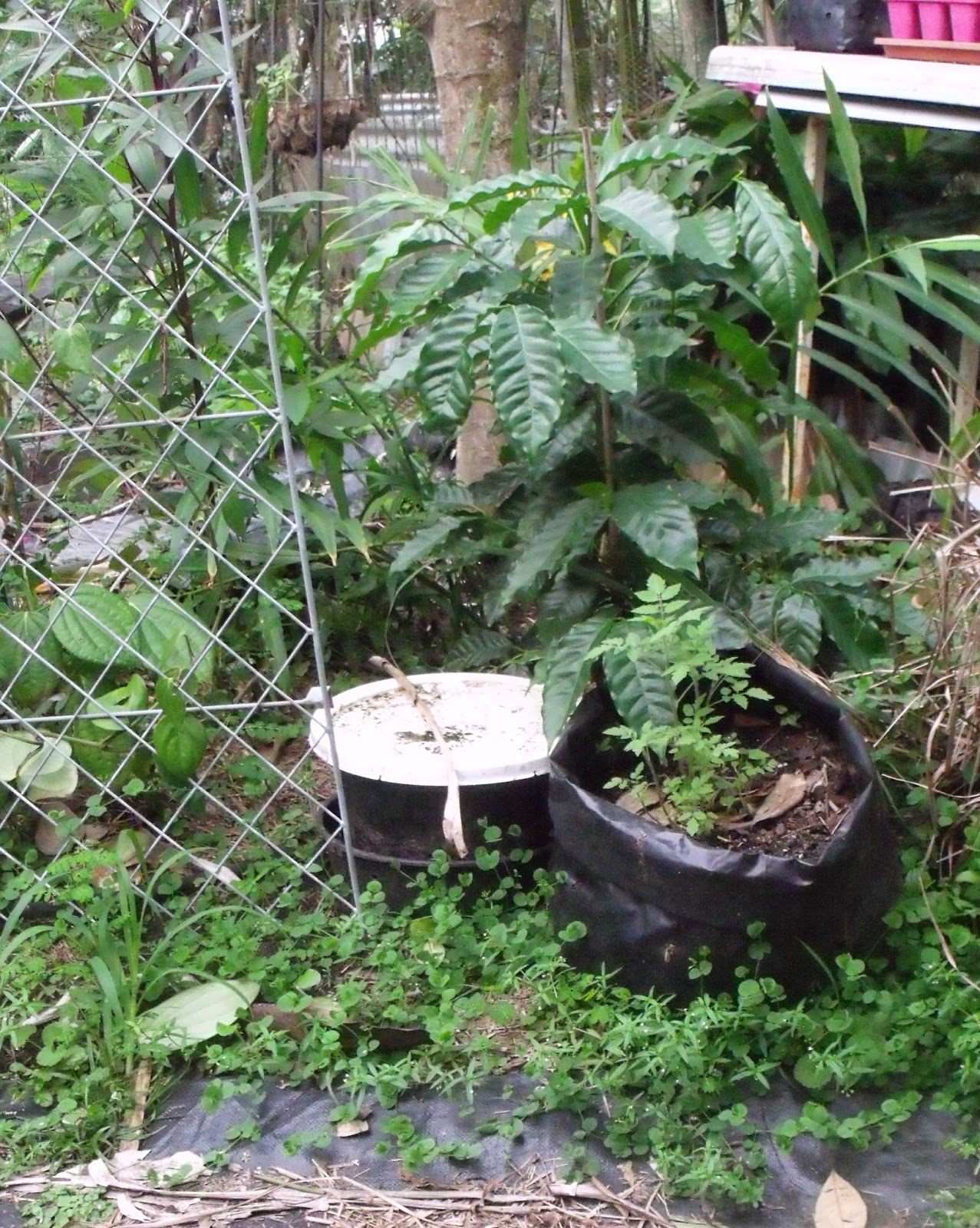 I have mostly just been adding this as a side dressing to my greens and they seem to love it.  One of these days I will add some water and make a foliar feed.  I just add kitchen waste to these buckets when I have something I think the worms will find particularly tasty, the rest goes into the tumbling composter.
I will be making up some tutorials on my different compost systems with links on the tutorials page.  If you dont already compost why dont you give it a go?

I think I might actually be a week late on this compost week thing, this is a great facebook page International compost awareness week   or the home page here .

PS I remember after this was posted that I also have an old garbage bin at the back filled with damp shredded leaves  that gets forgotten until it has formed nice crumbly leaf mold.

Posted by africanaussie at 9:37 AM

Email ThisBlogThis!Share to TwitterShare to FacebookShare to Pinterest
Labels: compost, in gound worm farms, In the garden, International compost awareness week., May