The emergence of the Ulysses butterfly at last!

Yesterday I noticed that the Ulysses chrysalis was turning brown, and I thought either the butterfly was going to emerge or that it had died. It was dark when I got up this morning, grabbed the flashlight and peered into the bush to see ......... the butterfly hanging there alongside the chrysalis!  It was way too dark to take photos and I stayed as long as I could before I had to leave for work.  Gosh I wanted to stay there so badly.
My hubby had strict instructions to take lots of photos and this is what he took..... 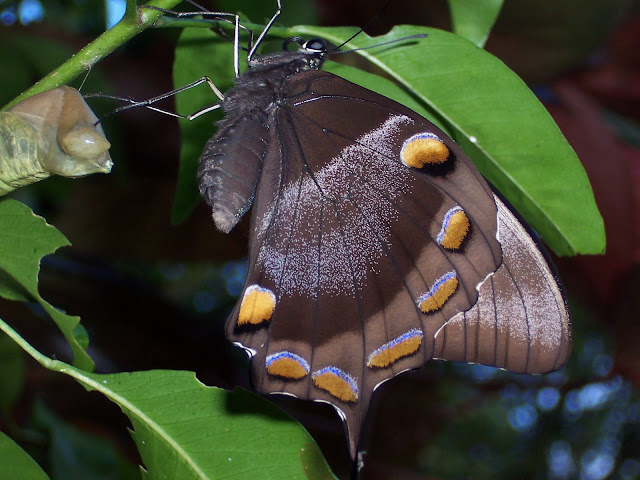 Isn't he a great photographer?
Just look at the detail. 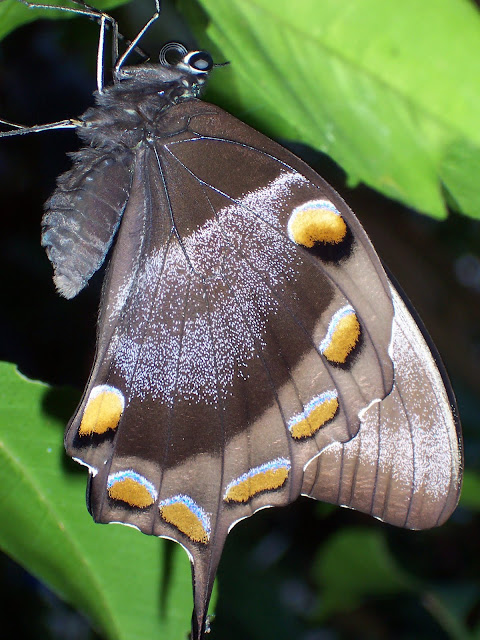 The inside of the wings is a brilliant iridescent blue, but as soon as it opened its wings a gust of wind came and it fell to the ground.  Then it took off and flew away - high up into the tree.  I hope it is all right - it needs someplace out of the wind to build up its strength.
So my thoughts of you actually getting to see the iridescent blue wings have been dashed.
I will persevere though, and the good thing is that I now know where they lay their eggs.....
Posted by africanaussie at 9:46 AM

Email ThisBlogThis!Share to TwitterShare to FacebookShare to Pinterest
Labels: butterflies, May, ulysses butterfly